Why you'll love having an account with Apple Pay 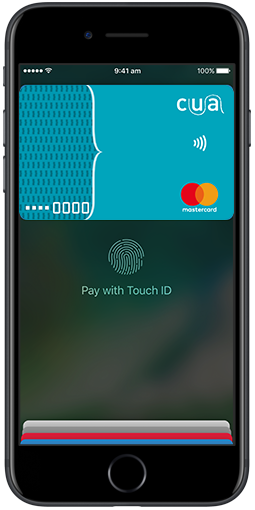 Step 2:
Tap the plus sign in the upper-right corner Step 1:
Open the Apple Wallet app on your iPhone

Don't have a CUA card? Discover your options

How to pay in stores

iPhone:
To pay in stores, there is no need to wake your iPhone or open an app. Just hold the iPhone near the reader with your finger on Touch ID. You’ll see Done on the display, along with a subtle vibration and beep, letting you know your payment information was sent.

Apple Watch:
Double-click the side button and hold the display of your Apple Watch up to the reader. A gentle tap and beep confirms that your payment information was sent*.

*Apple Pay works with iPhone 6 and later in stores, apps, and websites in Safari; with Apple Watch in stores and apps; with iPad Pro, iPad Air 2, and iPad mini 3 and later in apps and websites; and with Mac in Safari with an Apple Pay enabled iPhone 6 or later or Apple Watch. For a list of compatible Apple Pay devices. see https://support.apple.com/km207105.